Welcome To The 11th Issue of Volume 2!

The third Friday during the month of September is National POW/MIA Recognition Day. The purpose is to honor those military members that have been determined Prisoners of War and/or Missing in Action.
This year, the ceremony will be held on Friday, September 16 at 10 a.m. Those attending will gather at the end of Main Street in Westcliffe by the big flagpole at Cliff Lanes.
“We promised to NEVER FORGET THEM. This is a great way to show our dedication and love.”

All in the public are encouraged and welcome to attend. Members of the American Legion Post 170 Honor Guard will conduct this ceremony.
The ceremony will include a presentation of the POW flag for installation on the flagpole. The 5’ X 8’ POW flag will be raised under Post 170’s U.S. flag.

The Post 170 Officer in Charge (OIC) and Post Chaplain will speak on the importance of remembering those that valiantly fought and are now classified as POW/MIA, and they will reinforce the commitment that they “are never forgotten.”

Most recent records released by the Defense POW/MIA Accounting Agency (DPAA) dating back to World War II show the following facts and figures:
During World War II, 124,079 were listed as POW’s and 73,126 were MIA’s.
During the Cold War Era, the number of POW’s have been deemed as “Classified,” while those MIA are 126.
For the Korean War, 7,140 are POW’s and 7,802 are listed as MIA. These numbers changed after President Trump was able to secure the release of these soldiers remains earlier last summer.
6 September 2022

The POW/MIA flag symbolizes the United States’ resolve to never forget POWs or those who served their country in conflicts and are still missing. Newt Heisley designed the flag. The flag’s design features a silhouette of a young man, which is based on Mr. Heisley’s son, who was medically discharged from the military. As Mr. Heisley looked at his returning son’s gaunt features, he imagined what life was for those behind barbed wire fences on foreign shores. He then sketched the profile of his son as the new flag's design was created in his mind.
The flag features a white disk bearing in black silhouette a man’s bust, a watch tower with a guard on patrol, and a strand of barbed wire. White letters “POW” and “MIA”, with a white five-pointed star in between, are typed above the disk. Below the disk is a black and white wreath above the motto “You Are Not Forgotten” written in white, capital letters.
​
NEVER FORGET! 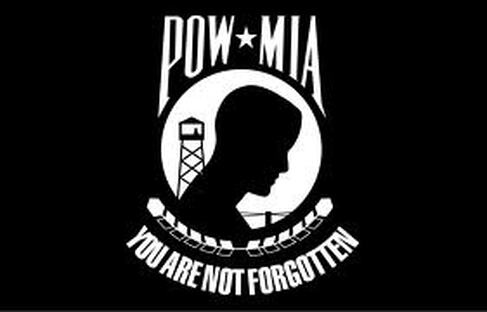 Camper Gives Update on Status of the Recall Protest; Hearings to be Held
Within Next Two Weeks

The Valley Beat has learned that a group of Valley citizens are working to protest the recall results after it was announced that the effort by a committee organized to remove Commissioner Tommy Flower from his chair on the Board of County Commissioners was successful.
There have been rumblings of allegations that some of the petition circulators were harassing community members in an effort to get them to sign the petition.  Additionally, citizens were to have an opportunity to read a statement issued by Flower before agreeing to sign said petition.  Such allegations were made against Flower by petition carriers that he was a “pedophile and “fired as a teacher at Custer County School.”  These allegations are completely unfounded.
If you signed the petition because you felt pressured or coerced into doing so, contact Custer County Clerk and Recorder, Kelley Camper to find out how to do so.  The deadline to remove your signature is Friday, September 9, 2022.  Because the Courthouse is closed on Friday’s, the sooner you get the ball rolling, the better.
You will be required to write a statement describing the encounter and include your name, address, and phone number, sign and have notarized.  Camper cannot notarize your statement so you will need to take it to a different notary that resides in the county.  You cannot submit statements via email; you must deliver it in-person.
What are the next steps in the ongoing saga?  This is not a quick process.  A county clerk from another county will be chosen by the Colorado Secretary of State, Jena Griswold and a hearing will take place.  There is no word on when that would occur, at this time.
Stay tuned to The Valley Beat for up-to-date information as we will report it as it becomes available.

UPDATE:  The Valley Beat learned that Custer Clerk and Recorder, Kelley Camper received 18 requests to have names removed from the petition.  “Right
now, they (Recall Group) have 769 good signatures.  They need 764.  I have also had six
protests that will be heard.  I have received two protests that won't be heard
because they are from out- of- county residents.  I haven't set a date for the
hearing yet.  It will be sometime next week or the week after.  I have to
hold it by September 30.”
We will stay on top of this story and more updates will be announced as soon as they are available.

Mark your calendars for the First Annual Blues, Brew’s and BBQ’s event, sponsored by The American Legion Post 170, Westcliffe, this Saturday, September 17, 2022.  Come out from 10 a.m. until 6 p.m., or anytime in between and enjoy all the food and fun you can partake.
The event is also proudly sponsored as well by the Silver West Feedstore, located at 116 N. 2nd Street in downtown Westcliffe.  Admission to this great day of music and food is by donation only.  Don’t forget to come hungry as Post 170 will be hosting their famous Burger Burn, where hamburgers, hot dogs, chips, and drinks will be available for purchase.  Hot Dog, chips, and soda or water will cost $6 and a hamburger, chips, and water or soda will be $10.  100 percent of the proceeds from food sales and admission donations will go to help and support Veterans in Custer County. Silver West Feedstore is seeking the best brews in the state of Colorado.  They will be available for purchase as well.

For more information, please contact the event organizer, Rich Posadas at 719-242-3474.
See you all for delicious food, Colorado brews, and amazing blues on September 17!

​     Last Saturday, September 10, 2022, citizens came out to the Silver Cliff Community Park where they were asked to give their input on new plans for the park, treated to free popcorn, hot dogs, cotton candy, and tons of family fun.
For some time now, the Town of Silver Cliff (TOSC) trustees and park committee have been working diligently to come up with plans for an upgraded park and writing grants to make it happen.  Families were invited to give their input on what they would like to see added or changed.
In addition to the free food, including fresh-spun cotton candy, there was also face painting, that was enjoyed by young and the young-at-heart.  Children had many opportunities to run off their excess energy by playing cornhole, volleyball, baseball, horseshoes, and just running around in general.  No one let the cooler, fall-like temperatures, dampen their fun.
Please view the photos in the slideshow to see the plans and contact TOSC to offer your suggestions as well.  Many kudos and thanks to TOSC for all their hard work and care for their citizens to make the Town of Silver Cliff the best community in Colorado!