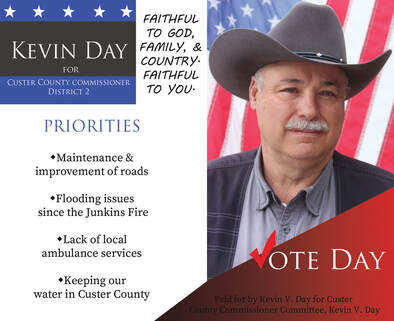 This post is in response to the 3 County Sheriff's endorsement of Kaitlyn Turner who is the Democrat appointee for Judicial District 11 District Attorney here in Colorado.
Several weeks ago I contacted the office's of all four Sheriffs departments that are represented by, and have to work with the District Attorney of Judicial District 11 by telephone and left a voicemail with each of the 4 Sheriffs to kindly please return my call.
The 1st call I received back was returned from  Chafee County Sheriff John Spezze.
After introducing myself, I asked him about the endorsement from the other 3 Sheriffs and that I'd like to hear from him in his own words why he chose not to also endorse Turner.
His response was that he would not endorse her, because it is his belief that no Sheriff should ever do so because that is not something an  elected Sheriff should even think about getting involved in as an elected official.
I also received a return phone call a couple of days or so later from Fremont County Sheriff Allen Cooper.
After introducing myself to him, I asked him his reasons for the endorsement of Turner, and I stated  also that before I made up my mind further in this matter, that I also wanted to hear from him his reasons for doing so, straight from the horse's mouth so to speak.
His answer was such that he couldn't endorse Linda Stanley based on her past.
I asked him to give me details of that and after some initial discomfort on his part, he finally admitted that it was because of her censure.
Allen said that was unforgivable to him and that he had fired people for less. He said, and I quoute "That isn't an error in judgment, that is a character flaw and those things cannot be corrected".
I asked him what evidence he based his actions and decisions on, and he said the recorded proceedings of her censure from the Colorado State Supreme Court.
I then asked if he had read those proceedings personally or had access to them and he said he had read them and still had copies of them on his computer.
I asked him to send them to me and he agreed to do so. I certainly did receive those records from Allen.
I also asked him for a copy of the initial letter from Sheriff Shannon Byerly from Custer County.
That letter stated in the heading area "for your eyes only" and asked for signatures from I believe 18 different law enforcement officers, Sheriffs and other officers and public employees to sign the letter of endorsement also.
I never received that copy to this day.
I also asked for a copy of the letter he sent to Fremont County Republican Chairman Bob Dewey stating that his reasons for not endorsing her is because Linda Stanley didn't answer the censure claims. That is a lie it seems to me.
I read the Colorado Supreme Court proceedings records and I can plainly see that Linda  absolutely answered each and every single point brought up and that each answer is part of the  case file from the  Court.
Custer County Sheriff Shannon Byerly, Park County Sheriff Tom McGraw, and Fremont County Sheriff Allen Cooper did sign the letter of endorsement for Kaitlyn Turner who was appointed to the position by governor Polis.
None of the other 15 or so individuals would sign the letter.
Custer County Sheriff Shannon Byerly and Park County sheriff Tom McGraw never returned my phone call to me when given the opportunity to explain in their own words their reasons for signing the letter of endorsement for Kaitlyn Turner.
That to me speaks volumes in not a very good way, as to their character in my view of this situation.
I do however appreciate both other Sheriffs returning my phone calls and also for their time spent speaking to me and sending me information and some of the documents that I inquired about.
I have also done my due diligence before deciding on the validity of the reasons each Sheriff gave me, and I have to say that I absolutely agree wholeheartedly with Chafee County Sheriff John Spezze's reason that he does not believe it is something any Sheriff should do either way in an official capacity.
As for the reasons given by Fremont County Sheriff Allen Cooper, I will honestly say that I wholeheartedly disagree with him that a censure is a character flaw and is a firing offense.
A simplified example that I can use, is for instance someone owning a horse that has a certain character flaw, and that anybody with a lick of horse sense knows that a character flaw can easily be taken care of by someone that knows horses.
Apparently after speaking with Sheriff Cooper it seems to me that he doesn't possess that skill-set to handle humans and their imperfect flaws and does not earn my faith in his judgment of human character. He has exhibited a serious error in his judgment of Linda Stanley, along with Park County Sheriff Tom McGraw and Custer County Sheriff Shannon Byerly.
Some of the employees of each of the 3 Sherrif's offices agree that none of the 3 Sherriff's should have endorsed Turner based on her ways of handling various cases and their interactions with both her and the District Attorney's offices. I definitely agree with them.

A censure by the Court is the lowest possible step allowed in several steps possible to being disciplined or disbarred by the Court that they can choose from.
I would compare a censure to something like a first step corrective action that somebody might receive from their employer.
I certainly am not flawless and have had a corrective action administered to me on my employment record in the past.
In closing, I can truly say that after doing my due diligence regarding this matter that Kaitlyn Turner, Shannon Byerly, Tom McGraw and Allen Cooper have demonstrated to me quite clearly that they deserve to be voted out of office for the above stated reasons.
Thank you for everyone's consideration in this matter.

There are more airplanes in the ocean than submarines in the sky. 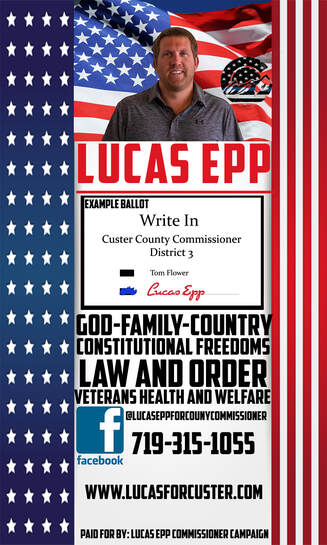